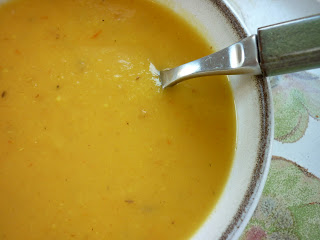 Here's a lovely comforting soup to brighten up a cold January day!  Parsnips are at their best right now and roasting them in the oven with some warming spices really brings out their sweet, mellow flavour.  Adding a touch of turmeric magically transforms the soup into a gorgeous golden colour too.

The cooking process is very similar to my recipe for Butternut Squash Soup and this is another simple recipe where there's no hanging around watching a pan for ages.  You can even roast the vegetables in the oven whilst you're cooking something else, then finish off the soup later, the next day or whenever you have time.

And if you don't want to make soup, the ingredients make a delicious vegetable dish.  Just follow the recipe and serve the golden roasted parsnips straight from the oven. 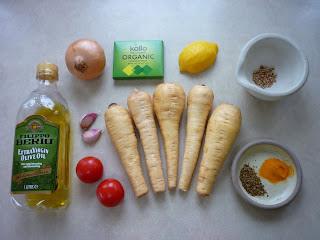 First, crush the cumin and coriander seeds in a pestle and mortar, just enough to bring out their spicy aroma! 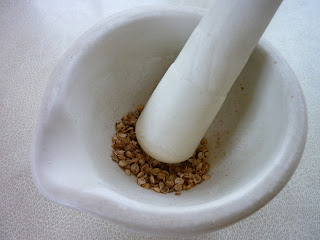 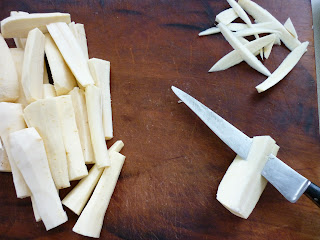 Peel and slice the onion into 8 segments.   Peel the garlic cloves and cut in half. Quarter the tomatoes.

Spread out all the prepared vegetables on a large baking tray and sprinkle over the coriander, cumin and turmeric and some freshly ground salt and pepper. 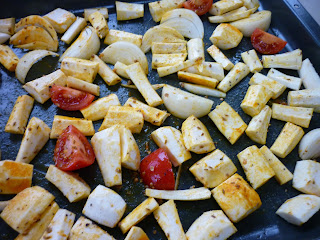 Drizzle over the olive oil.  Then, using a couple of large spoons or a fish slice, toss the vegetables in the oil and spices until well mixed.

Place the baking tray in the oven for about 25 to 30 minutes until the vegetables are soft and golden.  (Half way through the cooking time, just give the vegetables a good stir and spread them out evenly again) 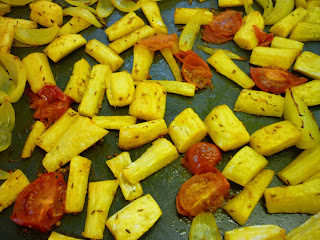 Transfer the vegetables to a food processor. 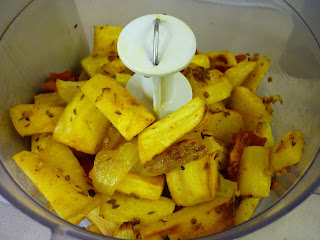 Process until you have a reasonably smooth consistency.   Then, continue to process as you pour in about 400ml of boiling water. 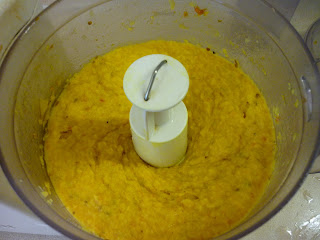 Dissolve the vegetable stock cube in a large saucepan filled with 800ml boiling water.   Add the parsnip puree and stir with a balloon whisk over a medium heat until gently simmering.  Finally add the lemon juice and check the seasoning. 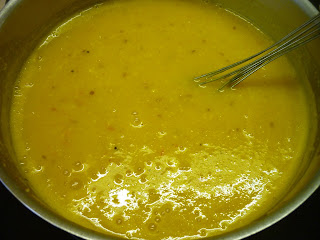